These devices use the heat contained in combustion gas to exploit energy from waste.

Based on specific needs, the heat generated by an incineration plant can be used to heat water, overheat water, generate high or low pressure steam or to heat diathermic oil.

They can both integrate and replace the functions of a traditional boiler running on conventional fuels. The cost of traditional fuels is constantly rising therefore recovering heat from incineration fumes, in addition to being a necessary condition to meet current legal prescriptions, clearly becomes a very important element in reducing operating costs. Indeed, it is not uncommon for the initial investment to be covered in a relatively short timeframe.

The different models in production are provided complete with the devices and technologies for full operation. Their design, construction and instrumentation comply with every detail of current applicable standards and safety requirements.

About our Heat Recovery Systems.
Incineration plants installed by Ciroldi S.p.A. can be equipped with two types of systems for fumes treatment:

To reduce polluting substances such as dust, chlorine, sulfur, heavy metals, etc. the systems adopted are generally dry, with injection of a suitable reactant (bicarbonate) and then filtering.

Cooling fumes, required before treatment, enables heat recovery systems, in the form of steam or for heating diathermic oil or water.

For treatment of fumes coming from small and medium size incinerators for chlorine free organic waste, such as animal carcasses or slaughter house waste, where the main pollutant is almost exclusively particles, Ciroldi developed and patented a special scrubber called “SmokeBlock”, which can be installed directly on the furnace flue, with great benefits in terms of installation costs, operation, space requirements and energy consumption.

This is the most complete solution for gas emissions treatment since, thanks to its versatility, it provides performance levels able to satisfy even the strictest limits imposed by current applicable laws.

The fume purification section, which requires that gas be cooled before being treated and so is placed after a heat exchanger, ideally consists of a bag filter unit preceded by a dry neutralization reactor, with a suitable system for storage, grinding and dosage, fed with specific chemical reactants – usually sodium bicarbonate and active carbonates based on the chemical absorption process “Neutrec®” SOLVAY – used first of all to reduce SO2, HCl, HF and more in general the acidic components of the emissions, in addition to heavy metals and complex and organic compositions and chlorine (IPA and dioxins).

An automatic cleaning system (parallel compressed air at 7 bar controlled by a control panel according to programmable cycles and depending on the differential depression before and after the filters) ensures that the chemical absorption and filtration processes are kept stable and effective as well as fumes discharge; the screw feeder at the bottom of the filter and the discharge valve ensure collected dust is discharged as well as materials resulting from the neutralization process.

A final suction device, equipped with a modulating valve with radial sectors, controlled by a system that detects output depression in the afterburner chamber, guarantees that they are discharge regularly, keeping the incinerator at constant depression according to the value set on the control panel.

A flue at the end of the process discharges fumes at a temperature over 130°C (a condition that guarantees the absence of a visible plume) at an exhaust speed of > 15 m/s. 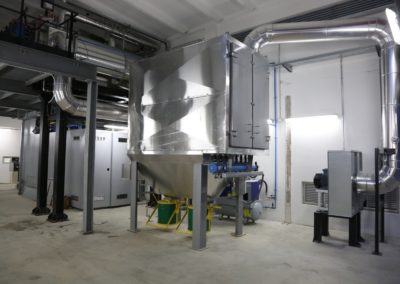 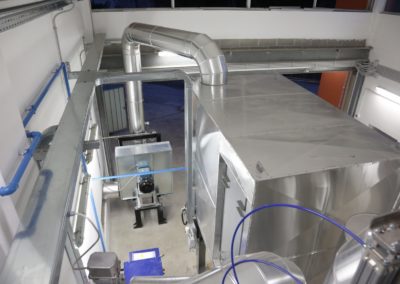 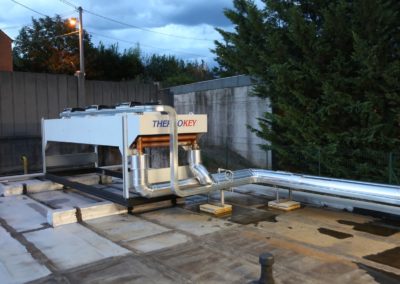 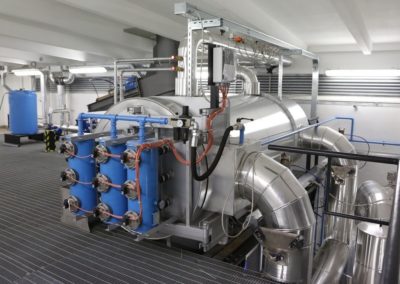 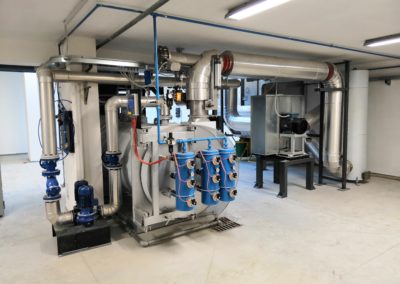 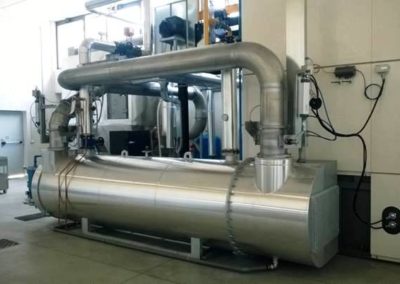 The patented SmokeBlock wet reduction plant was specifically designed for applications on hot fumes from incineration furnaces where the only pollutant worth noting for reduction consists of particles with medium-fine grain size.

The operating principle of Smokeblock is based on the reduction capacity of a combined system consisting of a classic spray scrub column where a series of fine water barriers spray the entire section where fumes pass and douse dust transported in the gaseous flow thereby separating the two; solid particles are thus pushed to the outside of the device where they are then discharged together with excess liquid.

The water used for scrubbing is stored in a dedicated closed container where it is circulated, after sedimentation, by a centrifugal pump.  Thus, the system operates as a “closed circuit” without any need to replace water except for the water needed to replace the fraction lost by evaporation.

So, solid residues from the purification process remain inside this container. These residues are disposed of, like the ash from the incineration process, in compliance with current applicable regulations.